The Old Armoury is a wood frame post and beam structure of approximately 5,000 square feet which was built by the village of Georgetown in 1866 as a Drill Hall for the local militia. It was designed by well-known Canadian Pacific Railway engineer Walter Moberly. In 1890 the structure was relocated from the Market Square area a few blocks away to its present spot in the Georgetown Fairgrounds Park. 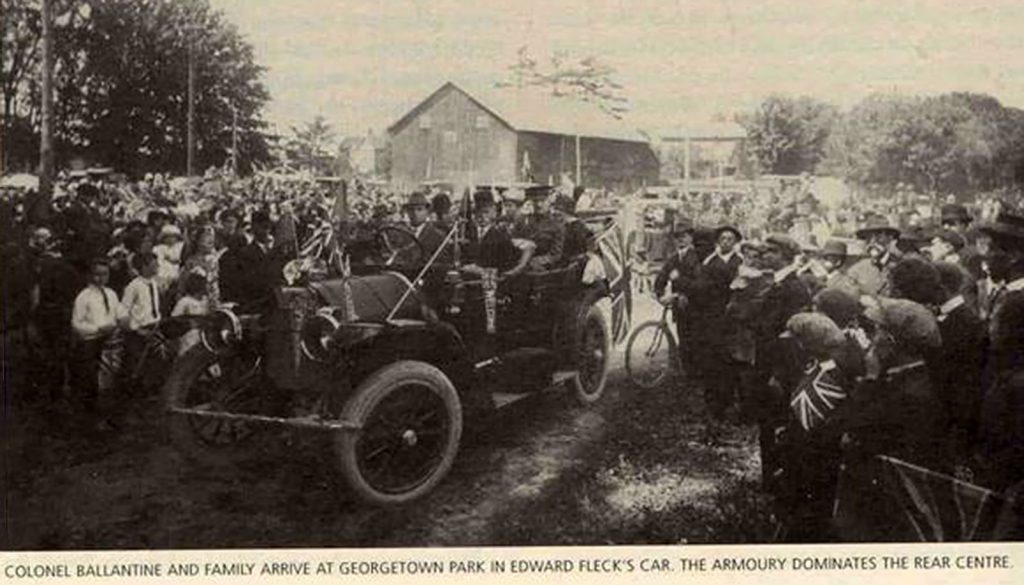 Mark Rowe, Past Chair of the Heritage Halton Hills Committee, stated that The Old Armoury “…has been an integral part of the history of Georgetown throughout its long history. While the building was designed to be purely functional, its historic significance and cultural importance have rendered it more valuable than most fine architecture in the Town. As one of the oldest buildings in the town, The Old Armoury is a very well-known local structure and a fixture of the park. Like many of the older drill halls, it has also served as a community centre and dance hall.”

The Old Armoury was built by the townspeople of Georgetown in response to the Fenian raiders, an organization of Irish-Americans trying to bring pressure on Britain to withdraw from Ireland. The importance of the Fenian Raids was that they created a great feeling of Canadian nationalism in British North America and showed Canadians that safety lay in unity. The result was the confederation of the Canada we know today.

Most of the 100 Drill Halls and Armouries that were constructed in Ontario and Quebec at that time have been demolished. Georgetown’s Old Armoury was the last functioning Drill Hall dating from the 1860s, only ending this role in 1997 when the Lorne Scots, ‘C’ Company moved to their newly constructed Armoury on Todd Road.

In World War I, The Old Armoury served as the recruitment centre for the 4th Battalion which formed part of the first Overseas Expeditionary Force in 1914. During World War 2 the Lorne Scots served as defense platoons for each “Brigade Headquarters” and since World War 2 they have provided personnel for NATO and UN missions and many other operations around the world.